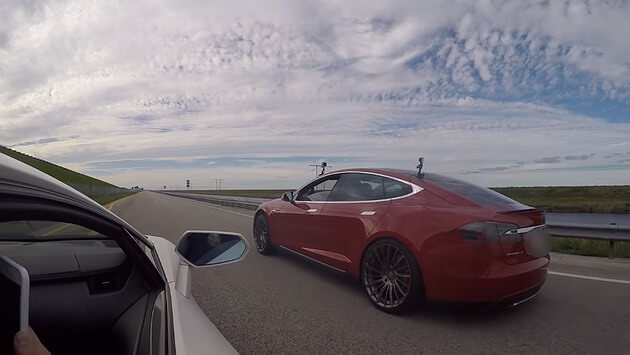 Now this is a race! Let’s take a look at the stats. First, the American made Tesla Model S P90D in Ludacris mode. This beast is making 762HP and its AWD! Not to mention, it weighs a ton so the power is actually getting to the ground!  The P90D starts out as a regular, run of the mill Tesla Model S P85D but then with some wizardry from the genius’s at Tesla, the P85D’s 221-hp front and 470-hp rear (691 hp combined) motors are swapped out for a front motor that makes 259 hp and 244 lb-ft of torque and a rear motor that produces 503 hp and 469 lb-ft of torque. Total output is 762 hp and 713 lb-ft of torque. Those are jaw dropping numbers right there!

Now, on to the Italian made supercar, the Lamborghini Aventador LP700-4. The only mods done to this Aventador is a Capristo exhaust. Generally speaking, an exhaust alone doesn’t really add much HP, it’s more for sound.  However, on a V12 like this, it’s going to produce more HP than an exhaust would by slapping it on a V-6 or 4-banger…but you probably already knew that. So, this Aventador stock is making 691 horsepower and 509 lb-ft of torque. With the mods, let’s put it at a conservative 700 hp and 510 lb-ft of torque. We’ll let you argue about the actual numbers in the comment section.

Previous This Is One Seriously Fast Scion…
Next The 15 Best Sports Cars Under $15,000 (These Are Actually For Sale!)