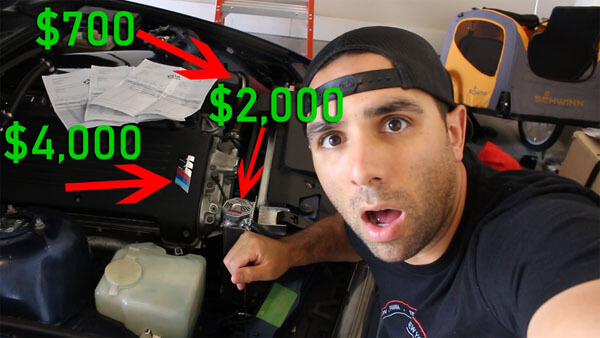 If you’ve been following my E36 M3 project car build, you’ll know the end goal has always been to swap an S54 into the E36 M3. Well, after many months of waiting, I was finally able to get this done. Before we get into the nitty-gritty of how much this swap cost, there are a few important things to bring up. So, let’s get into it.

First and most important, I did not do this swap myself. Why? There’s a couple reasons for this. I’ve done simple Honda Civic swaps years ago and I’m sure I could have gotten this swap done, eventually. But that’s one of the main reasons I hired a shop to do this that has done this exact swap many times. I didn’t want this to be a non-driveable project car that lived in my garage for six plus months because I was 45% of the way done and I was stuck. Also, I have a two car garage with little to no extract space. Pulling an engine, storing the old engine, being able to maneuver an engine hoist or cherry picker was not something I was able to do. All in all, it was worth it to me to have an experienced shop like Boost Logic complete this swap for me.

Boost Logic is a local Austin Texas performance shop. They specialize in high horsepower GTR builds but they do just about everything. The shop foreman, Roman, has personally completed more than 10 E36/S54 engine swaps, so he knows the, “ins and outs” of this swap. He knows the little details that would have held me up for weeks if not months.

With all of that out of the way, here’s the last bit of info you need to know before you watch the video breakdown of how much the E36 M3, S54 swap costs. I went above and beyond. I bought a very nice, but expensive, Zionsville radiator. I had most of the bushings replaced. I had the RTABs reinforcement done. I had new engine mounts put in. I bought a carbon fiber airbox. I did much more than was actually ‘needed’ to make this swap work.

I actually spoke with Roman about this fact. He says that if you wanted a bare bones, S54 into E36 M3 swap done and done by a shop (that charges labor), you could do it for about $9-10K. So, if you’re mechanically inclined, know what parts you need, have the time and space, I would say you could get this swap done for probably$6-8K depending on what you do. Remember, there are a few items that are much easier to do when the motor is out, like the rod bearings. The S54 vanos is also a maintenance item that some people say is a must do. Boost Logic suggested that if the vanos looks fine, not to touch it. So, I listened to them. With that being said, Dr. Vanos is local to me here in Austin Texas, so when I need to have that done, I’ll swing by his shop and have the pro do it.

With that being said, check out the video below where I break down just how much it costs to swap the S54 into an E36 M3. Enjoy!